It's been a long time since I last wrote a blog post reflecting on what I've been doing in the classroom. I remember writing one when I returned to work after maternity leave in 2015. During maternity leave I'd joined Twitter and became hugely inspired and excited about maths teaching - I returned to work raring to try out loads of new approaches and resources for the first time. My current situation feels like that one all over again. I've gone back to proper teaching after a year in limbo. Last year I was still in the classroom - but not my own classroom. I was teaching various Year 11 intervention and withdrawal groups in a number of different schools. I really missed belonging to a school community. An opportunity arose to move to a brand new school in the same MAT, only five minutes from my house, so I seized it. I've always wanted to be involved in setting up a new school and it's turning out to be just as exciting and wonderful (and exhausting!) as I expected. I absolutely love the school's vision and culture. It's very frustrating that I live in a grammar school borough, and I'm so happy that there's an amazing comprehensive school that I can guarantee my daughters have a place at. On Open Day we had parents tell us that their children had passed the local selection tests but they were putting our non-selective school down as their first choice. I'm so proud to be part of it.

My classes
I teach 8X1 and 8Y4 (also known as Cardano and Leibniz). Because we only have two year groups, in some subjects (e.g. a subject that only has one lesson a week) teachers might teach every single Year 8 class, which is a time saver in terms of planning. There is no overlap in planning for my two Year 8 classes because they are very different groups. I also teach a totally mixed Year 7 class, though we've reviewed that and we're re-grouping all of our Year 7s after half-term. My current Year 7s are the most delightful class I've ever taught! People warned me that I'd miss teaching GCSE and A level, and in fact that's what stopped me from applying to work at the school in its first year when it was in a temporary building. I haven't been missing them at all. I've been enjoying focusing on developing my Key Stage 3 teaching, and I know I'll teach A level and GCSE again in the future. It is so nice to teach maths without the constant exam focus. I've taught Year 11, 12 and 13 every single year of my teaching career so this year is totally different. Change is good.

Resources
I've been using MathsPad in most lessons, as well as plenty of Don Steward and some things from variationtheory.com. Here I'll share a few examples of resources that I felt worked particularly well.

When I taught percentages to 8X1 I used mixed percentage multipliers from variationtheory.com. There are three sheets, starting with this one:

and ending with this one:

This was a really good level of challenge for my students.

For my 13 students in 8Y4 I created a different set of sheets with a lot of structure and scaffolding. I decided to teach them multipliers (that in itself was a difficult decision). I started with increasing using this resource: 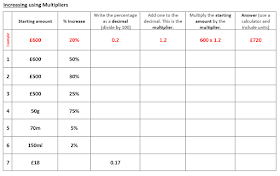 This is nothing special or new, but it had the right amount of structure and direction as a starting point for them. We ended up doing parts of mixed percentage multipliers too, it just took us a bit longer to get there.

When I taught reverse percentages to 8X1 I made good use of MathsPad. I like the structure of their slides on this topic: 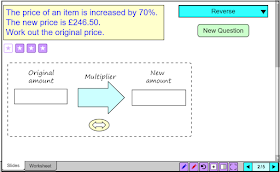 The associated worksheet starts with a couple of examples and some accessible questions, leading on to a really high level of challenge. I've only shown extracts from these resources because these require a subscription to access the full resource.

I've just moved onto algebra with both my Year 8 classes. 8X1 particularly enjoyed this expanding activity from Don Steward: 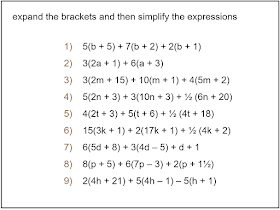 I was delighted when I spotted a pattern in the answers and they got all excited about it. It made it really easy to check answers too.

We also had a lot of fun with MathsPad's Number Tricks resource. 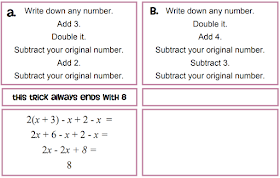 For Year 7 I used MathsPad when teaching negative numbers. I particularly like their Number Line Journeys activity (again, this is just an extract - not the full resource): 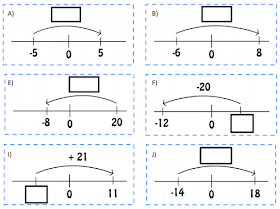 MathsPad also have a lot of nice little tasks that you can dip into for extension work. For example their sheet Negative Number Puzzles: Addition and Subtraction has pyramids, magic squares and all sorts of little puzzles involving negative numbers.

I could go on about resources all day. I'm enjoyed using lots of activities I've not used before. Some have gone well, some haven't. It's always good to try new things.

Retention
We are fortunate to have Hegarty Maths which I'm a big fan of. My 8X1 class are completing a MemRi task for homework every week. MemRi tasks automatically ask students questions on topics they have studied in the past. By moving most of their retrieval practice from classwork to homework I've got more time to focus on the topics I'm teaching in the lesson.

8Y4 really need support on retrieval. They often have trouble remembering the previous day's lesson. I'm investing a lot of time on revisiting learning from Years 1 to 7. They also respond very well to set routines. We had a Discovery Day in October and we had to move our seats into a new arrangement for a day - I hadn't expected them to respond so negatively to a change in routine, and it made me realise how important it is for these particular students to know what to expect so they feel safe in maths. For retrieval and routine - and to help these students to experience success in maths - I've started using the 'Five for Five' model I wrote about here. They are responding very well to it. Obviously I'm not able to say if it's having any effect on their long-term retention - we'll have to wait and see.

I make my own set of questions each lesson but it only takes a minute. An example is shown below - these questions are the right level of difficulty for this particular class. Four questions are from primary school or Year 7 and the final question relates to their current topic. The questions change subtly each day but are always on the same topics. On the first day we go through it in great detail, on the second and third day they refer to their notes before we go through it together and on the last day I give it as a test that I mark. By the last day they really want to get full marks. 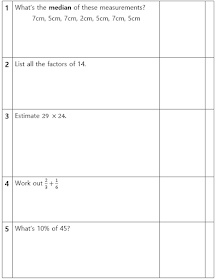 The other thing I've introduced is Memory King - inspired by something Dani Quinn said years ago which I mentioned in this blog post about teaching Foundation.  In the first week of Memory King I challenged 8Y4 to learn their first twelve square numbers. They all had to recite the numbers to me - and those who wanted to could also enter a competition where they recited them at the front of the class, and we timed them to see who could do it fastest. It all got very exciting and they got really into it (they were practising in the playground!) so I invited the Principal to come and watch them perform their square numbers. It was amazing to see students who lack confidence in maths get so excited to show the Principal what they know. The winner was a boy who managed to recite all twelve in about 2 seconds which was insane. I then set them the task of learning the names of polygons from triangles up to decagons. I think the whole class had a tear in their eye when the girl who doesn't speak much English stood up and so beautifully recited 'triangle, quadrilateral, pentagon, hexagon, septagon, octagon, nonagon, decagon'!  After that I set them the seven times table. This might seem like an odd one, but I know that they are not all fluent in times tables and if I can get them excited about learning and reciting them then I will.

Depth
The final thing I want to reflect on is timings. A few years ago I started a writing a series of presentations about teaching topics in depth rather than rushing through them. This year is my first time teaching a Scheme of Work that is written by a MAT and used in a large number of schools. I'm struggling with it. Because we had a whole week of Inset at the start of term (owing to us opening a new building) we started the term behind on the timings. We then only had three weeks to teach Year 7 algebra from scratch including simplifying, expanding single brackets and sequences. This is about half the time I needed! Everything was rushed, which makes me really unhappy. We lost a few days to school events and then I ended up with only three lessons to teach the whole of negative numbers! Argh. Such a fundamental topic in such a short time. In the last lesson I gave them this exercise from TeachIt Maths: 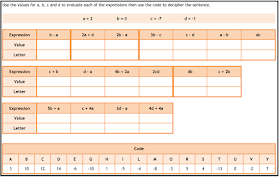 The amount they struggled (with adding and subtracting negatives, not the substitution) confirmed what I suspected - I had taught negatives way too quickly and it needed another week or two. I just don't know where I'll find that week.

We don't have to do MAT assessments until January but the topics are packed in really tightly and nothing is getting the attention it needs. After half-term I have one week to do the whole of written methods and order of operations! I need a whole week on order of operations alone. But when will I find time to explore all the wonderful multiplication methods I want to do with them? It's all very frustrating, and I know that I probably have many readers in the same situation, having to constantly rush through teaching because of assessment deadlines. I haven't worked out a good solution for this, but I'm just letting you know that I share your pain!

Anyway, it's half-term for me now so I get time to reflect and re-energise. I'm looking forward to all the fun maths I get to teach after half-term, but for now - I need a rest!