My fascination with old mathematics textbooks continues. I've previously blogged about an algebra book from the 1950s and a Victorian textbook from 1885. But now... well, hold the front page, because @BTNMathsJam sent me a link to a digitised arithmetic textbook from over 300 years ago. Bear in mind that this was way before The Industrial Revolution. In the early 1700s the population of England was only around 5 million and most people lived in poverty. Education in England was mainly for wealthy boys, and focused largely on Latin and Greek, morality, discipline and the Bible. 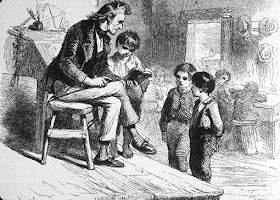 I've been reading the 22nd edition of Hodder's Arithmetick which dates from 1702 (there are also some earlier editions on Google Books). In this post I'm sharing some cool stuff from this fascinating book, just because I love it and you might find it interesting.

The Earliest Maths Textbooks
According to 'Early Schools and School-Books of New England' (Littlefield, 1904), the earliest arithmetic printed in English was Robert Recorde's 'The Ground of Arts: Teaching the perfect work and practice of Arithmetic, both in whole Numbers and Fractions, after a more easie and exact form then in former time hath been set forth'.  This book, with its excellent snappy title, was written in 1540 in the form of "a dialogue betweene the master and the scholar; teaching the art and use of arithmetic with pen". This book remained popular for well over a hundred years, during which time a number of other arithmetic texts were published including works by Baker, Wingate and Oughtred. In 1661, the first edition of 'Hodder's Arithmetick' was published in London and was hugely successful, both in England and America. James Hodder was a master of a writing school in London. 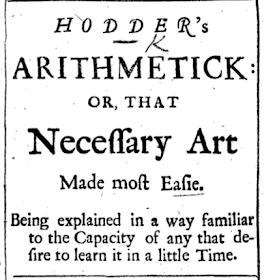 In the 18th Century, arithmetic was taught in a similar way to writing. The teacher would provide a example from a book that students would work out on a separate sheet of paper and, once correct, it would be copied into a notebook known as a ciphering book. This sounds a bit like a modern approach involving students having a go on a mini-whiteboard before copying a neat worked example into their exercise book.

Much of Hodder's Arithmetick is devoted to 'vocational' arithmetic - working with money, measures and time (for example 'the addition of wine measures' which involves carrying hogsheads! Plus a whole chapter on 'The Rule of Barter').

Cypher
The first thing that jumped out at me in Hodder's Arithmetick was the use of the word cypher for zero.


"Numeration is that part of arithmetick whereby one might rightly value, express, and write any number and sum propounded. To the attainment whereof, that all numbers are expressed by these characters following, whose simple value by themselves considered, you may here take notice of

The Cypher serves to make up the number of places, but of itself signifies nothing"


It's fascinating to see the word cypher listed here. A century later, Victorian textbooks used the word zero. You may be aware that the word zero comes through the Arabic literal translation of the Sanskrit śūnya, meaning void or empty, into sifr. The word cipher or cypher was once commonly used for zero in the English language, but has come to refer to encoding. 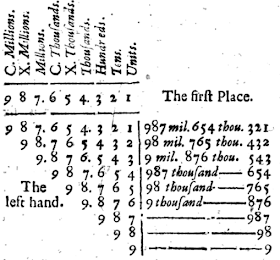 'A prick with your pen between every three figures' - now known as a comma.

Multiplication and Division
The times tables are presented in Chapter 4: 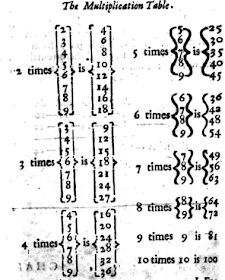 Note the sensible lack of duplication (ie 7 x 6 is not listed because 6 x 7 has already been listed).

On learning multiplication tables, Hodder says "You must of necessity get it very perfectly by heart, before you can make any further progress in this art". I'm with him on that.

In describing how to do long multiplication, Hodder tells the reader to keep track of workings by crossing out digits in the multiplier when they've been dealt with.


"And having done with the first Figure of the Multiplier, cancel it with a Dash of the Pen, and proceed to the next..."

Cancel it with a dash of the pen! I love this.

The description of the method for division is a bit hard to follow. It's similar to the short division method we now use, though the digits are placed in different positions throughout the calculation (eg the answer ends up to to the right of the 'crooked line' instead of at the top). 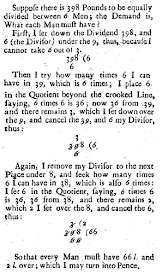 Hodder later goes on to describe 'a more easy way of division, and with fewer figures'.


"I will not stand to shew you more of this common way of division, which is indeed very tedious and burdensome to the memory, and hath caused (to my knowledge) many to despair of attaining it, and to proceeding further in this art. But proceed by the method following, which will enable one to go on with far more ease and delight then commonly is seen".

I tried to follow Hodder's 'easier method' but started to lose the will to live, so gave up.

The section on division ends with a glorious yet terrifying example which takes up an entire page. 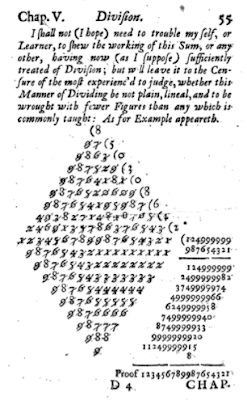 The next chapter in the book is reduction, then we have fractions followed by 'The Rule of Three' (also known as 'The Golden Rule', which involves proportional reasoning). However, after reading the division chapter, my brain needs a rest! I will continue to share the delights of Hodder in a subsequent blog post. In the meantime, you can read the whole book here. Enjoy!