The Joy of Planning

I had great fun planning a lesson on tessellation last week. Planning lessons is one of my favourite parts of the job.

This lesson certainly won't be everyone's cup of tea, but I enjoyed planning it so much I wanted to share it here. Tessellation is no longer on the GCSE specification but I think it helps students develop their knowledge of angles in polygons, plus it's interesting, so is worth looking at.

I started with a quick Don Steward question aimed at refreshing my students' memories on how to calculate angles in polygons, which I'd taught them the day before.

I then asked the class, "What is tessellation and where do we see it?". One or two students described it in terms of tiling, and some pointed out examples of tessellation around the room (the painted bricks on the wall, the square vinyl tiles on the floor). I gave them a definition, which they noted down, and we talked about the meaning of the word plane in this context.

I told them about the etymology of the word tessellated. In planning this lesson I was interested to find that the word derives from the word 'four', referring to four corners.


tessellated (adj.)
1690s, from Late Latin tessellatus "made of small square stones or tiles," past participle of tesselare, from tessella "small square stone or tile," diminutive of tessera "a cube or square of stone or wood," perhaps from Greek tessera, neuter of tesseres, Ionic variant of tessares "four", in reference to four corners.

I showed them some pictures of tessellations. 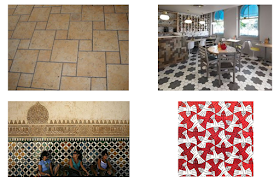 I spoke of The Alhambra. A student put up his hand and told me he'd been there. I told him I was very jealous - I long to visit.

I also talked about Escher. Having recently been to the Escher exhibition at Dulwich Picture Gallery I could have happily talked about Escher for the full hour, but alas - time is limited. My Year 10s were amused when I told them that in the 60s Escher's work was loved by both hippies and mathematicians. A student put up his hand and said he had a book full of Escher's artwork at home. This made me happy.

I showed some examples and non-examples of tessellation (when planning lessons I often do a quick trawl of google images for the pictures I need to illustrate a point).

They noticed that the angles around the point have to sum to 360o if the polygons are to tessellate.

I showed an example of a semi-regular tessellation, which can be created by using two or more regular polygons repeatedly to tile the plane (for example an octagon and a square). 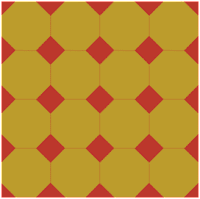 I then showed them a series of animations from a Tumblr account called Skunk Bear. They were 'wowed' by these animations (one boy asked, "where do you get all this cool stuff, Miss?". "Mostly through Twitter" I replied.). I think these gifs will help my students remember what tessellation is. If not, the animations certainly help foster an enthusiasm for the beauty and complexity of mathematics.
When I told them about the recent discovery of a new type of tessellating pentagon ("It's a really big deal", I said) - they laughed. "Miss, are there really people who spend their life looking for tessellating pentagons? Shouldn't they be trying to find the cure for cancer or something?".

All of this chat about tessellation took a good 25 minutes. It was a bit longer than I normally talk, but that's ok. They listened intently, and their reactions suggested that they were interested. I could have gone on for longer - Mathigon has some great stuff on tessellation - but I was keen to get them working on some angle problems. So I set them a Don Steward exercise. 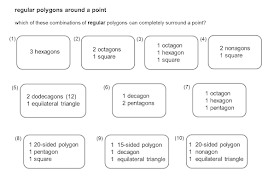 During this exercise some students asked about the names of a 20-sided and 15-sided polygon, and thankfully I had a list to hand (borrowed from a Don Steward slide) and we chatted about the words. I overheard some students trying to break the words down and make sense of them.

Some of my students completed the tessellation activity really quickly - others took a lot longer. I followed it up with two Don Steward activities (Regular Polygon Angle Compilation and Pentagon Angle Compilation) which were pretty challenging. These activities developed their fluency in calculating angles in polygons. Towards the end of the lesson I invited a couple of students to come up to the board and talk through their approaches to these problems.
In the final minute of the lesson I decided to bring everyone back together to tell them about platonic solids. One student kept referring to a dodecagon as a dodecahedron during the lesson so I wanted to pick up on the difference between ~gon and ~hedron. So I ended up with an unplanned tangential plenary...

This lesson may have been relatively light in 'exam content' but it was rich in mathematics. It might not have ticked all the 'good lesson' boxes, but I felt that it went well.

I don't write formal lesson plans. I create minimalist PowerPoints instead. I make no apologies for using slides - this is not 'death by PowerPoint' - it's just a bit of structure. Here's my slides for this lesson, feel free to borrow any bits that you like.

Do I sometimes spend too long planning lessons? Absolutely! Are my lessons the 'best possible way of teaching that topic'? Absolutely not. I have not perfected the art of teaching mathematics. This tessellation lesson is very 'me', and I doubt anyone would want to teach it in the same way I did.

I enjoy lesson planning. It allows me to explore my subject. It allows me to be creative. I wholly agree with Megan Guinan's recent tweet, "Planning lessons is my second favourite part of the job, after delivering a lesson I've planned well."

I'd love to hear all about a lesson you've taught recently that you particularly enjoyed planning and delivering.